In the last column of this academic year, I want to reflect on the changing role teachers have had in the past and are taking up on a larger scale in the near future. That of a coach for their students.

As a matter of fact, nothing is really new as we’re all coaches. Good parents coach their kids in a way that they become more friends than parents; inspiring leaders and collaborative managers coach their employees into being responsive and responsible team players. In our academic institutions, versatile teachers now coach their students in their educational and personal development, and local students also often coach their international peers to help them integrate more quickly and better into the Community. And let’s not forget that in the Netherlands the 17 million Dutch people living on this small piece of flat land often act as the coach of their national football team. In Flanders they seem less assertive in this respect.

The term coach is defined as “someone whose job is to teach people to improve at a sport, skill, or school”, so with “teacher” as a synonym. What it doesn’t explicitly say is whom you coach and this is where the cultural context comes in.

As a teacher, you probably do not coach a local (Dutch or Flemish) student in the same way as an international one. Ways of communication, perceptions of authority, respect for rules, learning styles, and the like, have an impact on the relationship between coach and coachee. Professional skills as taught more and more in our respective language centres are essential in this process on the side of the student/coachee. Further developing these skills in an intercultural context and hence creating cross-cultural competency (the ability to operate across different cultural settings), known as a 21st century skill, is paramount in the education of the modern (international) young professional. 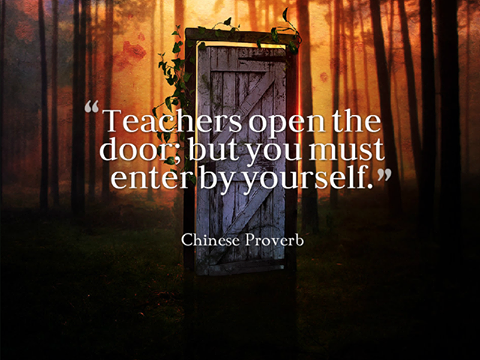 But as we know, “it takes 2 to tango”. So, the teacher coach also needs to develop specific competencies to coach his or her students across cultures. Basically, they are the same skills as for the coachee, but with a special focus on cross-cultural didactics such as collaborative and culturally responsive teaching and other learning approaches. Some of these skills are taught in our institutions in light of the further professionalisation of the staff and the personal development of the students. Finally, it also requires an attitude of empathy, open-mindedness and flexibility, in line with my favourite (Chinese) saying: “Teachers open the door, but you must enter by yourself” (see picture).